From the book Artful Anticks

An Owl once lived in a hollow tree,
And he was as wise as wise could be.
The branch of Learning he didn’t know
Could scarce on the tree of knowledge grow.
He knew the tree from branch to root,
And an Owl like that can afford to hoot.

And he hooted—until, alas! one day
He chanced to hear, in a casual way,
An insignificant little bird
Make use of a term he had never heard.
He was flying to bed in the dawning light
When he heard her singing with all her might,
“Hurray! hurray for the early worm!”

“Dear me!” said the Owl, “what a singular term!
I would look it up if it weren’t so late;
I must rise at dusk to investigate.
Early to bed and early to rise
Makes an Owl healthy and stealthy and wise!”

So he slept like an honest Owl all day,
And rose in the early twilight gray,
And went to work in the dusky light
To look for the early worm all night.

He searched the country for miles around,
But the early worm was not to be found.
So he went to bed in the dawning light,
And looked for the “worm” again next night. 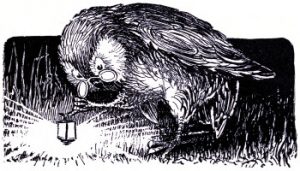 At last in despair he gave up the search,
And was heard to remarkremark to say casually, as in making a comment., as he sat on his perch
By the side of his nest in the hollow tree,
“The thing is as plain as night to me—
Nothing can shake my conviction firm,
There’s no such thing as the early worm.” 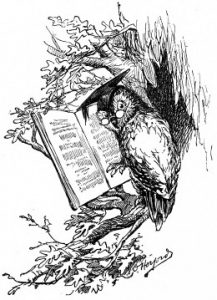 From the Book Artful Anticks 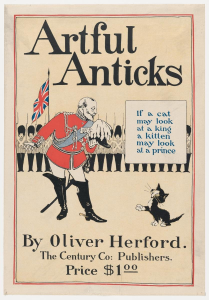