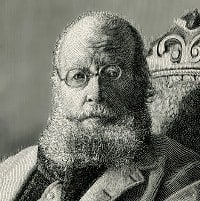 May 12 is the birthday of English poet Edward Lear, who would be 208 years old if he were still alive. He is well known for his drawings as well as for the poems and limericks that he wrote. Lear has been called a nonsense poet because he liked to use made-up words along with real ones in his poems. He also wrote about fanciful things that wouldn’t happen in real life. You may have read or heard his most famous poem, “The Owl and the Pussycat,” which is often taught to young children. Here is a short excerpt:

Edward Lear grew up near London as one of 21 children in his family. He was raised by his sister Ann, who was more than 20 years older than him. Lear was often sick during his childhood, suffering from asthma and epilepsy among other health problems.

Lear’s drawings and paintings of animals were first published when he was a teenager. As an adult, he enjoyed traveling to faraway places and painting landscapes of what he saw in his travels. He published his first book of nonsense limericks in 1846.

A limerick is a kind of short, funny poem that has five rhyming lines and starts with the words, “There was a…” Limericks usually have the same kind of rhythm. Edward Lear didn’t invent this kind of poem, but he did help to make it popular.

Here is one of Edward Lear’s nonsense limericks. Try reading it out loud and notice the rhythm and rhyme patterns:

There was an Old Man with a beard,
Who said, “It is just as I feared!
Two Owls and a Hen,
Four Larks and a Wren,
Have all built their nests in my beard!”

If you like these, here are a few more of Edward Lear’s most famous poems: