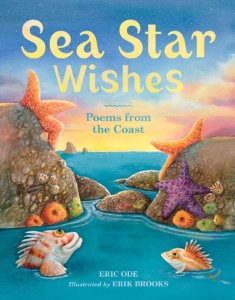 My pick for July, 2013 is Sea Star Wishes: Poems from the Coast by Eric Ode, Illustrated by Erik Brooks.

In addition, I interviewed Erik Ode about his life as a poet and about his new book. Here is what he had to say. 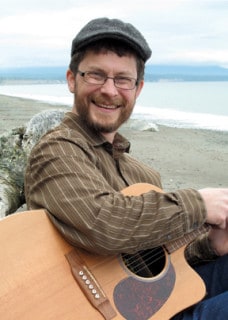 Kenn Nesbitt: How did you come to start writing children’s poetry?

Eric Ode: We put quite a bit of poetry to use in the classroom when I was still teaching elementary. I had collected a scattering of titles and would empty the library shelves now and again. Judith Viorst, Robert Frost, A.A. Milne, Ogden Nash, Valerie Worth, Eileen Spinelli, Kalli Dakos,… And of course we had multiple copies of all of the Shel Silverstein tomes. Being surrounded by all of that magnificent work was (and still is) very inspiring! The first poem I remember writing, a narrative called “Sarah and Mariah,” was far from brilliant, but it was just mediocre enough that I kept writing. Eventually I got up the courage to begin submitting pieces to magazines and for consideration of anthologies.

KN: Who / what are most influenced you as you began writing children’s poetry?

EO: The wonderfully irreverent, bordering-on-inappropriate “Rolling Harvey Down the Hill” was my introduction to Jack Prelutsky. My guess is that title’s been banned by some school districts! I still think it’s an excellent and oh-so-funny collection. And I came across “Eletelephony” by Laura Richards in the anthology “Sing a Song of Popcorn.” The total ridiculousness of those twelve lines shouted, “Hey, look what you can get away with!” It remains near the very top of my “I wish I had written that poem” list.

EO: First and foremost, poetry gives children permission to play with words. I’m convinced that is why kids enjoy poetry. And we know kids DO enjoy poetry when it is served up on an attractive platter and not force fed. Secondly, all of those groovy poetic devices; figurative language, play-on-words, imagery, rhyme, assonance, alliteration,… help create children with higher level language skills. You can’t build a really clever pun or metaphor without moving up the thinking ladder.

KN: Tell me a little bit about your career as a children’s poet.

EO: I tend to bounce back and forth between writing children’s poetry and writing children’s music. I’m not sure I could choose one over the other if I had to. Currently I’ve had three collections of children’s poetry published along with one picture book written in verse. This September, Pelican Publishing releases “The Boy and the Dragon,” and that story is basically one long adventure poem. I’ve been fortunate in having poems turn up in some 17 anthologies along with a number of text books and children’s magazines.

KN: Tell me about your new poetry collection, Sea Star Wishes: Poems from the Coast.

EO: I LOVE how this book came together. Erik Brooks’ illustrations are stellar, and the design team at Sasquatch Books really outdid themselves. Such a good looking release! This is my first collection to include several non-rhyming poems as well as poems with a less-rigid meter and rhyme scheme. Those were great fun for me to write, and although I’m still hard at work on tightly metered, tightly rhymed poems, I’ve been enjoying pushing myself more in that free verse direction as well. We’ll see where things go!