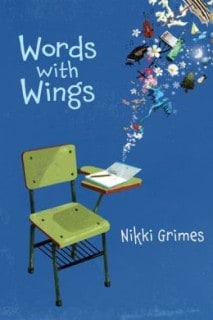 My pick for September, 2013 is Words with Wings, a novel in verse by Nikki Grimes.

In addition, I interviewed Nikki about her life as a poet and about her new book. Here is what she had to say. 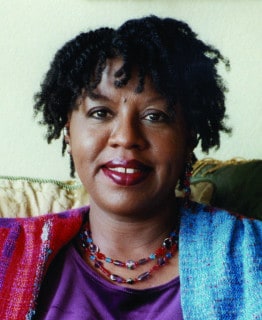 Kenn Nesbitt: How did you come to start writing children’s poetry?

Nikki Grimes: I suppose it helps that I began writing poetry as a child, myself. I started at 6 years old and have been at it ever since. I never actually planned to write for children, whether poetry or otherwise. I did, however, have a couple of ideas for children’s books, and whenever I attempted to write a picture book in prose, poetry flowed out of me instead. After a while, I got the message. I am first and foremost a poet. Whether working on a themed collection, a biography, or a novel, poetry is the strength I should lead with.

KN: Who most influenced you as you began writing children’s poetry?

NG: My earliest poetry influences weren’t children’s poets, at all. I was inspired by poets like Amiri Baraka, Langston Hughes, Pablo Neruda, Paul Lawrence Dunbar, Gwendolyn Brooks, Mari Evans, Khalil Gibran, Wm. Butler Yeats, Nikki Giovanni, T.S. Elliot. My tastes were, as you can see, very broad. In the years since I began writing for children, though, I took to the wonderful wordplay of Jack Prelutsky and J. Patrick Lewis, as well as the deft, but delicate work of Myra Cohen Livingston and Barbara Juster Esbenson. I also found myself drawn to the work of Lucille Clifton, Gary Soto, Naomi Shihab Nye, Jane Yolen, and Pat Mora—all poets who write for both children and adults. Maybe that’s because I started out writing for an adult audience, myself. I’m not sure. However, what I definitely appreciate about them all, besides the sheer beauty of their language, and the power of their metaphors, is that, no matter the depth or sophistication of their subject matter, they are all accessible, and that appeals to me. I always strive to be accessible to my readers. Poetry may be a high art, but I personally have no interest in creating work which is over the heads of all but a few.

NG: Poetry teaches children a love of language, and if we want a truly literate society, it begins there. Poetry also inclines children to weigh their words, and the words of others, I think. We could all stand to do more of that.

KN: Tell me a little bit about your career as a children’s poet.

NG: My career has been fairly organic. My first book of children’s poetry resulted from an acclaimed artist, Tom Feelings, asking me to create a collection to complement some of his existing work. Something on My Mind, as it was titled, was a book in which I illustrated Tom’s work with my poetry. That was a special and unique opportunity. I’ve since written two other books that began with visuals: From a Child’s Heart, with art by Brenda Joysmith, and It’s Raining Laughter, with photographs by Myles Pinkney.

I followed Something On My Mind with a number of picture book collections, most notably Meet Danitra Brown. Danitra marked a turning point for me, though. It was the first time I told a story in verse. I would go on to write other picture book collections using a narrative thread, including two more Danitra Brown books, plus My Man Blue, Come Sunday and, more recently, Oh, Brother.

While working on the Danitra Brown books for Lothrop, Lee & Shepard, then editor, Melanie Donovan introduced me to Spoon River Anthology, by Edgar Lee Masters, which opened me to the limitless possibilities of the novel-in-verse. Once I read it, I was off and running with books like Bronx Masquerade, a poetry-prose hybrid, Dark Sons, A Girl Named Mister, and more recently, Planet Middle School and, now, Words With Wings. I’m only beginning to scratch the surface, of course, but I’m having fun along the way!

I still have a love for picture book collections, though. I have two in production, at the moment, and I believe I have at least a few more in me, yet!

KN: Tell me about your new poetry book, Words With Wings.

NG: I had the honor of serving as a judge for the National Book Award, a couple of years ago, and I came away with a renewed excitement about the beauty of language, and the wonder of imagination. In Words With Wings, a novel about daydreaming, I wanted to celebrate both.

Words With Wings had an interesting journey. It began as a picture book. That was the way I had imagined it, and that was all I thought it would ever be. However, when I sent the manuscript to editor Rebecca Davis, at Wordsong, she suggested that there was quite possibly more to explore. Rebecca and I have worked together many times over the years, and I have learned to trust her point of view, and so I took another look at the manuscript, keeping her comments in mind. I did recognize the latent possibilities for expanding the story into a novel, though I was reluctant to admit it. There was a fair amount of groaning involved, as I’d given her a finished manuscript, and she was now suggesting that, rather than being at the end of the project, I might only be at the beginning! Eventually, I agreed to expand the story. Now, of course, I’m glad I did.

I think it’s critical that we encourage daydreaming—dreaming in general. I would have no career as a writer if I hadn’t first daydreamed about it. I hope Words With Wings inspires young readers, as well as their parents and teachers, to make room for daydreaming in their own lives.