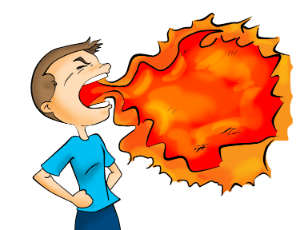 Fearless Frederick had some hot sauce
and it set his mouth afire.
It made flames fly from his nostrils
and his upper lip perspire.

It ignited all his taste buds.
It made steam shoot out his ears.
He turned redder than a stop sign.
He burst out in boiling tears.

He was hopping on the table.
He was running ’round the room
as his hair began to sizzle
and his face began to fume.

He tried sucking on a popsicle
and gargling in the sink.
He drank everything he found
inside the fridge that he could drink.

He tried glugging tubs of ice cream.
He poured ice cubes on his head,
but it didn’t help to quench
the flaming mouth of Fearless Fred.

He tried all that he could think of
to exterminate the blaze,
why he even stuck his tongue inside
in a jar of mayonnaise.

And then when at last his mouth was cooled
by bucket-loads of water,
the first thing that he said was,
“May I please have something hotter?”