Author’s Note: Unlike most of my poems, this one is not
intended to be funny. I hope you enjoy it nonetheless.
This retelling of the classic poem “The Night Before Christmas”
is my holiday gift to you, my readers.
–Kenn 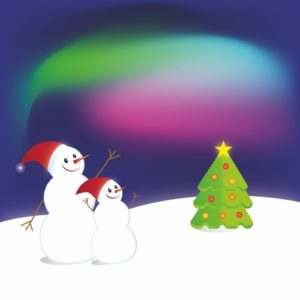 December can bring such miraculous things
when the nights are enduring and cold,
and some have seen sights on those cold winter nights
that they marvel in awe to behold.

They’ve witnessed the hues of the purples and blues
as the Northern Lights put on a show.
They’ve heard the wind howl like a wolf on the prowl,
and seen orchids that bloom in the snow.

But some of the things that the wintertime brings,
well, you may find them hard to believe,
and the greatest of all that I ever recall
was a year ago, last Christmas eve.

The world was aglow in a blanket of snow
that reflected the stars in the night.
The evening was still with a crisp winter chill,
and our rooftop was mantled in white.

And here in our house, it was I and my spouse;
we were snuggled up warm in our bed,
while the children were deep in a wonderful sleep
as they dreamed of the morning ahead.

The garlands were strung and the stockings were hung
and the tinsel was draped on the tree.
The halls, decked with holly, looked festive and jolly,
exactly as Christmas should be.

A peace filled the air in the hall, on the stairs,
and all through our household that night.
The sandman was prodding for me to start nodding
and whispering, “Everything’s right.”

When, out of the quiet, there came such a riot
and rumble of sound from outside.
I leapt from my bed, shook the fog from my head,
and I opened the window up wide.

I looked to the sky when I heard a voice cry
from away in the distance off yonder,
“Now Dasher! Now Dancer! Now Vixen! Now Prancer!
On Comet! On Cupid! On Donder!”

“On Blitzen!” he cried, and at last I espied
the person I’d heard to exclaim.
A man in a sleigh was descending my way
as he called to his reindeer by name.

He soared through the night like an eagle in flight,
as his reindeer were nimble and quick,
and I knew right away that the man in the sleigh
was none other than jolly Saint Nick.

He called a command for the reindeer to land
and they set like a rustling of leaves,
then came to a stop near the chimney up top,
at the crest of our snow-covered eaves.

He sprang from his sleigh, dusting snowflakes away,
with a laugh that was bright and content.
Then he hefted a sack full of toys on his back,
and straight down the chimney he went.

I flew down the stairs to find Santa was there,
and was struck by the way he appeared;
he looked joyful and cheery, and not a bit weary,
and smiled through his snowy white beard.

His coat was as red as the hat on his head,
and his boots were as black as his belt.
His collar and cuffs were of downy white fluff
and his gloves were of ivory felt.

His cheeks and his nose were as red as a rose,
and the face of that jolly great gent
had eyes that would twinkle and sparkle and crinkle
as straight to his business he went.

He pulled from his sack a collection of track,
and he set up a train near the tree.
Then presents came out and he set them about
for the children, their mother, and me.

Then Santa let go with a great “Ho, ho, ho!”
as he finished his work at the tree.
He gave me a wink, and was up in a blink,
and he stuffed all the stockings with glee.

At last, with a “poof” he returned to the roof
so I ran to the window to view
as Santa called out with a whoop and a shout,
and away in a twinkling they flew.

He turned and he gave me a laugh and a wave
as his sleigh and his reindeer took flight,
and I heard Santa call, “Merry Christmas to all,
and to all, have a jolly good night!”

And that’s when I knew that the stories were true
for it happened here last Christmas Eve.
Yes, December can bring some miraculous things,
if you open your heart and believe.