What is a Diamante?

A diamante – pronounced dee-uh-MAHN-tay – is an unrhymed seven-line poem. The beginning and ending lines are the shortest, while the lines in the middle are longer, giving diamante poems a diamond shape. “Diamante” is the Italian word for diamond, so this poetic form is named for this diamond shape.

Believe it or not, the diamante was invented just 40 years ago. It was created by an American poet named Iris McClellan Tiedt in 1969, and has become very popular in schools.

Also known as a “diamond poem” because of its shape, there are two different types of diamantes; synonym diamantes and antonym diamantes.

The Rules of a Diamante

There are just a few rules to writing a diamante:

Here’s an easy way to visualize all three rules:

In this diamante, the words “Monsters” and “Creatures” mean the same thing, so they are synonyms.

In this diamante, you might say that the words “Cat” and “Dog” are opposites, or “antonyms,” so this is an antonym diamante.

To start writing a diamante, you first need to decide what thing you want to write about. The reason you want to pick a thing is that your first and last lines need to be nouns. In other words, your diamante will be about a noun, such as a “pencil” or a “pizza,” rather than about a verb, such as “jump” or an adjective like “smelly.” An easy thing to write about is something you like or something you see around you.

For this example, I will show you how to write an antonym diamante about the “sun,” and my second noun is “moon,” since the sun and the moon can be considered opposites.

Once you’ve chosen your two nouns, take a piece of paper and brainstorm as many words as you can that have to do with each of them. For example, make one column for each word and write down everything you can think of. You’ll want adjectives (descriptive words), verbs (action words), and even more nouns. Your lists should look something like this:

Don’t worry if you have more words than you need. It’s better to have too many words to choose from than not enough.

Finally, you’ll want to arrange your diamante, putting the synonyms or antonyms at the top and bottom, the adjectives next, on lines 2 and 6, the verbs after that on lines 3 and 5, and lastly your additional nouns on the middle line.

In the top half of the poem – lines 2 and 3 – your adjectives and verbs should be ones from your first brainstorming column – words that have to do with line 1, like this:

In the bottom half of the poem – lines 5 and 6 – your adjectives and verbs should be related to the noun on line 7, like this:

When you put everything together, you’ll end up with something like this:

As you begin writing your own diamantes, here are the important things to remember: 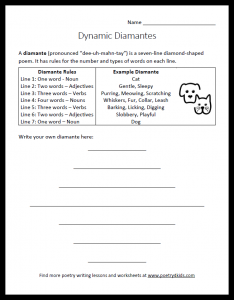