From the book The Walloping Window-Blind 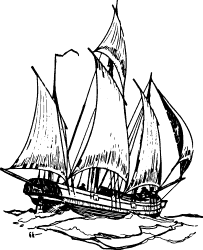 A capital ship for an ocean trip
Was The Walloping Window-blind
No gale that blew dismayed her crew
Or troubled the captain’s mind.
The man at the wheel was taught to feel
Contempt for the wildest blow,
And it often appeared, when the weather had cleared,
That he’d been in his bunk below.

The boatswain’s mate was very sedate,
Yet fond of amusement, too;
And he played hop-scotch with the starboard watch,
While the captain tickled the crew.
And the gunner we had was apparently mad,
For he sat on the after-rail,
And fired salutes with the captain’s boots,
In the teeth of the booming gale.

The captain sat in a commodore’s hat
And dined, in a royal way,
On toasted pigs and pickles and figs
And gummery bread, each day.
But the cook was Dutch, and behaved as such;
For the food that he gave the crew
Was a number of tons of hot-cross buns,
Chopped up with sugar and glue.

And we all felt ill as mariners will,
On a diet that’s cheap and rude;
And we shivered and shook as we dipped the cook
In a tub of his gluesome food.
Then nautical pride we laid aside,
And we cast the vessel ashore
On the Gulliby Isles, where the Poohpooh smiles,
And the Anagazanders roar.

Composed of sand was that favored land,
And trimmed with cinnamon straws;
And pink and blue was the pleasing hue
Of the Tickletoeteaser’s claws.
And we sat on the edge of a sandy ledge
And shot at the whistling bee;
And the Binnacle-bats wore water-proof hats
As they danced in the sounding sea.

On rubagub bark, from dawn to dark,
We fed, till we all had grown
Uncommonly shrunk,–when a Chinese junk
Came by from the torriby zone.
She was stubby and square, but we didn’t much care,
And we cheerily put to sea;
And we left the crew of the junk to chew
The bark of the rubagub tree.

From the Book The Walloping Window-Blind