What is a Limerick?

Limericks are one of the most fun and well-known poetic forms. No one knows for sure where the name “limerick” comes from, but most people assume it is related to the county of Limerick, in Ireland.

The reason limericks are so much fun is because they are short, rhyming, funny, and have a bouncy rhythm that makes them easy to memorize. In this lesson, I’ll show you how you can write your own limericks in just a few easy steps.

The Rules of Limericks

Limericks, like all poetic forms, have a set of rules that you need to follow. The rules for a limerick are fairly simple:

Now let’s take a look at the rhythm of the limerick. It goes by the complicated name “anapaestic,” but you don’t need to worry about that. What I want you to notice when you read or recite a limerick is that the first two lines and the last line have three “beats” in them, while the third and fourth lines have two “beats.” In other words, the rhythm of a limerick looks like this:

The rhythm doesn’t have to exactly match this, but it needs to be close enough that it sounds the same when you read it. For example, using the limerick above about the fellow from Hall, if we emphasize the beats, it reads like this:

Let’s take a look at another famous limerick:

There was an old man of Nantucket
Who kept all his cash in a bucket;
But his daughter, named Nan,
Ran away with a man,
And as for the bucket, Nantucket.

If you emphasize the beats when you read it, it comes out like this:

there WAS an old MAN of NanTUCKet
who KEPT all his CASH in a BUCKet;
but his DAUGHTer, named NAN,
ran aWAY with a MAN,
and AS for the BUCKet, NanTUCKet.

There are two more things that you will notice when you read limericks:

There once was a man from New York

There was an old woman named Dave

Then go to your rhyming dictionary and start looking for rhymes like “cork,” “fork,” “pork,” “stork,” or “cave,” “gave,” “wave,” and so on to find more words to complete your limerick.

Once you’ve found some rhyming words, you’ll want to start thinking about a funny ending for your poem. I find it’s easiest to write lines 1, 2, and 5 first, and then to fill in lines 3 and 4 afterward. For example, I decided to write a limerick about someone from Seattle, so I started it like this:

A talkative man from Seattle
would spend his days speaking to cattle.

I then noticed that the word “prattle” rhymed with “cattle” and “Seattle” so I wrote the last line, like this:

She said, “Why it’s nothing but prattle!”

Finally, I went back and wrote lines 3 and 4 to complete the limerick:

A talkative man from Seattle
would spend his days speaking to cattle.
When asked what he said,
one old cow shook her head,
and replied, “Why it’s nothing but prattle!”

You’ll notice that I changed the last line after I wrote lines 3 and 4.  I did this so the poem would make more sense. It’s okay to change your words at any time if it improves the poem.

Now it’s your turn to see if you can write a limerick of your own. Remember to follow these steps:

When you are done writing, read your limerick out loud to see if it has the right rhythm; three “beats” on lines 1, 2, and 5, and two “beats” on lines 3 and 4, as shown above. If not, see if you can rewrite some words to get the rhythm right.

I know that writing limericks is going to seem hard at first because it’s sometimes difficult to get the rhythm, the rhymes, and the joke to all work together. But don’t worry; with a little practice, you’ll soon be creating funny limericks of your own that will make your friends and family laugh. Have fun! 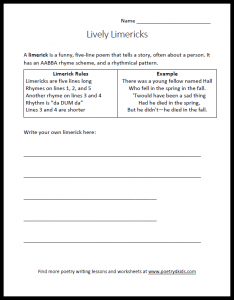