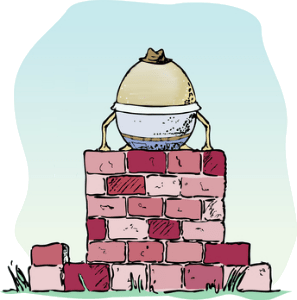 Some of the best known children’s poetry in the English language are the “nursery rhymes” of Mother Goose. Though no one knows for certain if Mother Goose was a real person, her rhymes have been popular with young children since the 1600’s. Some of the most popular Mother Goose rhymes include “Humpty Dumpty,” “Hey, Diddle Diddle,” “Little Bo Peep,” “Peter Peter Pumpkin Eater,” and many others. In fact, Mother Goose is credited with writing several hundred nursery rhymes.

But did you know that Mother Goose isn’t the only writer of nursery rhymes? “Twinkle Twinkle Little Star” was written by an English woman named Jane Taylor. Many of the short nonsense poems of Edward Lear would qualify as nursery rhymes. And some, such as “The Itsy-Bitsy Spider” are “traditional,” meaning we don’t know who wrote them.

In the past few decades, a number of children’s poets have also begun writing new nursery rhymes. For example, Canadian poet Dennis Lee has authored a number of books, including Alligator Pie, Jelly Belly, and Bubblegum Delicious, that are filled with new nursery rhymes. American poet Jack Prelutsky followed suit with books such as Ride a Purple Pelican, Beneath a Blue Umbrella, and The Frogs Wore Red Suspenders.

Many authors have even started writing funny “fractured” nursery rhymes, taking well-known Mother Goose poems and updating them with humor and modern ideas.

In fact, even you can write your own new nursery rhymes, and it’s not that hard. All you need is a pencil, a piece of paper, a little time, and your imagination.

Although nursery rhymes are usually very short, just 4-8 lines long, they almost always tell a story. For example, “Hickory Dickory Dock” tells the story of a mouse running up a clock and then back down after the clock chimes. “Little Miss Muffet” tells the story of a girl who sits down to eat, but is frightened by a spider.

When you tell a story with a nursery rhyme, it doesn’t have to be complicated. It can be as simple as any Mother Goose story. It might be a story about an animal, or a character with a funny name, or even just a counting rhyme or a poem about a place or a thing.

Let’s say you wanted to write about an animal. Why don’t you try writing about your favorite animal? I happen to like rabbits, so I’ll write about that. If you want to tell a story about a rabbit, you need to think about what rabbits do. We know they like to hop and eat carrots, so you could start by writing about a rabbit hopping in the yard, like this:

You don’t have to rhyme every line, but you need to rhyme some of the lines. Yard rhymes with card, hard, and guard. I decided to use guard. I guess someone needs to guard the carrots from the rabbit, so I finished the poem like this:

Bunny rabbit, bunny rabbit,
Hop around the yard.
But don’t go near
the carrots here,
for I’m the garden’s guard.

If you wanted to write about a cat, on the other hand, you could try something more like this:

Kitty cat, kitty cat,
let me pet your fur.
Then I will feed you fishy treats
and listen to you purr.

What animal is your favorite? Why don’t you see if you can write a short rhyme about something that they do?

Another common way to write a nursery rhyme is to write about a person. You’ll need to give them a name, and something to do. The name can be silly, like Humpty Dumpty, or a simple one like Jack.

Here’s a nursery rhyme I wrote about a hungry little girl named Katy. She was so hungry, that she didn’t stop eating when she was done with all her food.

Katy ate a plate of pancakes.
Katy ate and ate,
and Katy was so hungry
that she also ate the plate.

Your character doesn’t have to have a name. You can simply describe him or her; a boy, a girl, a mother, a teacher, and so on. Here’s a short little story I wrote about a short little teacher.

And here’s another that I wrote about a family and the things they like to eat:

Counting rhymes such as “One, Two, Buckle My Shoe” and “One Potato, Two Potato” are nursery rhymes that teach numbers and counting to very young children. When you write a counting rhyme, you probably want to at least include the numbers one through four, and possibly as high as ten. Here’s a short counting rhyme that I wrote. In addition to being a counting rhyme, and it’s a story about climbing a tree, collecting sticks, and coming back down.

You’ll find a long list of counting and math rhymes here. After you’ve read a few counting rhymes, why don’t you see if you can make up one of your own?

Nursery rhymes can even be as simple as a few rhyming lines about something you like (or maybe something that you don’t like). Simply decide what you want to write about (your pencil, your favorite video game, your bedroom, etc.). Here is one I wrote about my bicycle:

Here is another that I wrote about rain:

It’s raining down
in London town.
It’s raining up in Leeds.
The rain that rains
sustains the grains,
but also feeds the weeds.

And here is one that I wrote about spicy hot chili peppers:

Now that you’ve seen the different types of nursery rhymes you an write, it’s your turn to try one on your own. First decide what kind of rhyme you’d like to create — a counting rhyme, or a rhyme about an animal, a character, or a thing — and then see where your imagination and your pencil can take you!