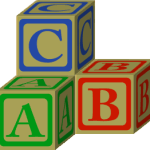 A fun and easy kind of poem to write is what I call an “alliteration poem.” Alliteration is when you repeat the beginning consonant sounds of words, such as “big blue baseball bat” or “round red robin.”

Writing alliteration poems is a terrific creativity exercise. Not only is it an easy way to write a poem, it’s a great way to get your brains working. You’ll need to think of a lot of alliterative words, and then form them into rhyming sentences.

Step 1: To write an alliteration poem, first pick a consonant. It can be any letter of the alphabet except for the vowels a, e, i, o, or u. For example, let’s say you choose the letter “B.”

Step 2: Think of as many words as you can that start with your letter and write them down. You’re going to need nouns, verbs, and adjectives, like this:

You may not use all of the words from your lists, and you may think of other words as you begin writing. That’s okay; this list is really just to help you get started.

Step 3: Form a sentence or two with some of your words, like this:

I bought a black banana,
And a broken baseball bat.

Step 4: See if you can add another sentence or two and a rhyme.

I bought a black banana,
And a broken baseball bat.
A burst balloon, a busted boat,
A beat-up bowler hat.

Step 5: Finally, see if you can come up with a reason for all of these things as a way to end your poems. Here’s what I thought of.

I bought a black banana,
And a broken baseball bat.
A burst balloon, a busted boat,
A beat-up bowler hat.

I wasn’t being brainy, bright,
or brilliant, but you see,
My brain was boggled after
Being bitten by a bee.

Here’s another example of an alliteration poem I wrote using the letter “Z.”

I see zebras from Zimbabwe
zipping all around the zoo.
I see Zeus up in the zodiac,
a zillion zithers too.

There are zephyrs blowing zeppelins
that are zooming near and far.
There are zealots counting zeroes
in a zone near Zanzibar.

There are Zulus wearing zoot suits
eating zwieback and zucchini
plus a zombie with a zipper
on his zinnia bikini.

Yes, I always have the zaniest
most zonked-out dreams like these,
because every time I go to sleep
I try to catch some Z’s.

From the book The Aliens Have Landed at Our School!

Now it’s your turn. Pick a letter and see if you can create your own alliteration poem using as many words as you can starting with that letter. Good luck and have fun!