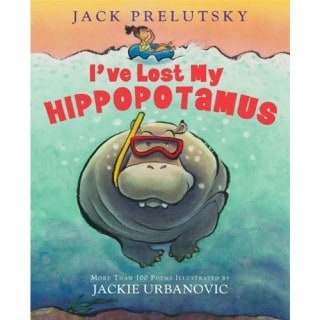 Jack Prelutsky is the author of many, many colletions of poetry for children. His new book, I’ve Lost My Hippopotamus comes out today. I had a chance to speak with Jack about his career and his new book recently, and you can listen to that interview here.

The audio player is at the bottom of the article, below this transcription. Scroll to the bottom and click the Play button to listen to the interview.

KN: This is Kenn Nesbitt with the poetry4kids.com podcast and today, I have the pleasure of speaking with Jack Prelutsky.  Jack is the author of many, many collections of Children’s Poetry and in 2006; he was named the first US Children’s Poet Laureate by the Poetry Foundation.  He has a new collection of above over 100 poems coming out this month.  I called, “I’ve Lost my Hippopotamus,” and we’re going to talking about that today.  Jack, how are you?

KN: Now, Jack.  You’ve been writing poetry for a while now since the mid 1960s and by my count, that’s nearly 50 years.  Not trying to make you feel old.

KN: You were younger then?

JP: I was.  I was also thinner and better looking.

KN: I can’t believe that.

JP: Well, some of the best things happen by accident.  I was just looking – I was in my 20s.  I was in my early to mid 20s.  I was looking for something to do with my life.  I always knew it would be something in the arts but I didn’t know what.  So, I tried many things.  I was a potter and a sculpture.  I made terrariums, I acted, I sang folk music, I even sang opera.

JP: I tried all sorts of things.  And then I had a friend who took me to sketch groups so then I started drawing and my drawings of people weren’t very good so I thought, “Well, you know what, I will draw from books and take more time.”  And my drawings weren’t very good.  But then I said, “Well, I will draw from and on my imagination,” and my drawings were perfect.  And I started drawing imaginary creatures, animals, birds, things with 11 heads and things that walk around mountains but could only go in one direction because the legs on one side were longer than the legs on the other side.

JP:  I remember a flightless bird that lived atop a hundred-foot tall tree but it fortunately had a hundred-one-foot long ton meant it was a ground feeder.

JP: Anyhow, I did this very carefully and I did about one a week and after six months, I had about two dozen of these.  They were very carefully drawn with pen and ink and watercolor.  No perspective.  I recognize perspective when I see it but I can’t seem to duplicate it.  Anyway, one evening, for reasons I still don’t know, I looked at these poems and I said, “Oh, I think.”  I looked at these drawings rather and said, “Oh, they need poems to go along with them,” and in about two hours, I wrote two-dozen little poems to accompany the drawings that I had taken six months to do.  I advent with the whole business aside and went on to something else.  I forgot about it for a few weeks and someone who’d published a few children’s books said, “Why don’t you show these to my editor?” and I said, “Okay.”  So, I went in to Macmillan Publishers …

JP: … and there was a bright, young editor who had just taken over there, at the children’s department.  Her name is Susan Hirschman.

JP: And she was very cordial and she looked at what I’ve done and she said, “You are very talented.  We want to publish you.”  And I said, “Really?  You mean – you mean you like my drawings?”  And she said, “Oh, no.  You’re the worst artist that I’ve ever seen.  But you have – you have no talent in whatsoever but your poems are delightful.  They’re wonderful.”  I said, “But I spent six months on the drawings and I only spent two hours on the poems.”  And she said, “It doesn’t matter.  The poems are good.  Drawings, not so much.”

KN: That should you tell you something that you were able to write, you know, poems …

JP: And I said, “But I flunked English 1 twice in college and English 2 once or the other way around.”  And she said, “It doesn’t matter.  You have a natural gift,” and I was very surprised.  But I went with it and I started writing and it was really for my own amusement at first.  And then, she suggested that I write about real animals because she said, even though she liked what I’d shown her, it was not a good idea for a first book.  Could I write about real animals?  Well, I had grown up in the Bronx in New York and I used to go to the Bronx Zoo about every two weeks.

JP: So, I spent a lot of time studying animals and I thought, “You know, I could write about animals,” and I did.  And it became my first book which was published about three or four years later in 1967 called, “A Gopher in the Garden,” and I went on from there.  By the way …

JP: … it turns out I can draw.  I just discovered this a year ago, all right, if I take my – I’ve actually been teaching myself to draw.  And last week, I told my editor at the Greenwillow Books, Virginia Duncan, “I’ve just written a book of short, funny poems.”

JP: And I told her, “I’m going to try to illustrate this.”

JP: I’ve been spending a lot of time practicing.

KN: Okay.  Have you’ve gotten the perspective thing down, yet?

JP: No.  But then, again, I have no perspective on most things.

KN: Well, I’d like to talk to you a little bit about your new book, “I’ve Lost my Hippopotamus.”  Now, just out of curiosity, how many books of children’s poetry have you published so far?  Do you know?

JP: Well, it depends.  How do you count?  Do you count anthologies also?

JP: Yeah.  Well, I published 10 or 11 anthologies and I’ve nothing like Lee Bennett Hopkins who is in the Guinness Book of World Records for the most anthologies ever created.  In most of my anthologies, though, I still have a number of original poems.

JP: And then, I’ve also done – I don’t know, either 10 translations from languages I don’t know and I mean, I’ve translated books from German and Swedish.

JP: How I did it I can’t begin to explain. Well, I can begin but it will take a while.  It’s outside the limits of this talk.

JP: Of the original poems, probably, I published about 60 books.

JP: And altogether, with everything, the anthologies and translations, and some of the translations actually were original – turned out to be original poems.  We used the drawings from the original book but then I just wrote new poems to go along with them.  So, I published about 80 books.

KN: And, “I’ve Lost my Hippopotamus,” is what?  Is that your sixth big book?  Your seventh big book?

KN: Sixth?  Well, that’s if we don’t count your retrospective book, “Be Glad Your Nose is On Your Face,” which is also a big book but that’s mostly poems from previous books.

KN: Right.  Okay.  And I noticed that you have a new illustrator for this book, Jackie Urbanovic.  And I …

KN: How do – how do you like – you know, discovering new illustrators take on your poems?

JP: And I don’t know for some reason that I had no say in, my editor said, “Let’s try somebody else.”

JP: I really don’t have that much say in it.  I have another book coming out.  I don’t know whether it’s this fall or next spring.  I think it’s the spring.  It’s a follow-up to, “Behold the Bold Umbrellaphant,” and brilliant illustrations by Carin Berger in this one.

JP: She has done something I’ve never seen done before so …

KN: So, I wonder if you have – if you have a poem from, “I’ve Lost my Hippopotamus,” that you would like to share with the listeners.

JP: I hadn’t thought about it.

KN: Oh, well, I should have mentioned it to you earlier that …

KN: And what does that mean, a golden – being a golden dragon?

JP: Yeah.  It’s every 60 years.  I don’t know what it means but I like the sound of it.  But I just happened – I really did happen to open by a complete happenstance to a poem here called, “Shopping at a Dragon Store.”

JP: I had no intention of reading this poem or any other poem so, bear with me.  Let’s see.

to see if I can find

the dragon I’ve been looking for;

A dragon of a certain size

that’s not too big or small;

A dragon that has friendly eyes

and likes to fetch a ball;

They’ve dragons here of every sort,

of every dragon breed,

but, so far, they’ve all fallen short

of being what I need;

I see one sitting on his bed;

I do not know his name;

But when I pet his scaly head,

he breathes a gentle flame.

I offer him a dragon snack

and play with him a while;

I hug him and he gives me back

Every second that we play

I love this dragon store.

KN: Now, I have a question about …

JP: I’m partial to dragons.  I think, they’re under appreciated.

KN: I agree.  In fact, I recently wrote a dragon poem of my own.  I do have a question about this book, though, because one thing I noticed as I was reading this book is that it is slightly different than your other big books and it’s not just – there’s a new illustrator, but whereas your other big books tend to be almost exclusively humorous poetry, this one also includes some of your haiku and it also includes a lot more of “Scranimals” type of poetry such as, you know, poems from Scranimals and …

JP: Yeah.  Well, that’s because I’ve been writing a lot of those lately because I just enjoy them.  It’s something I’ve been playing with.

JP: And also, I’m older so I may have maybe one or two more serious things to say now, although, if you have to know the truth, I’m actually less serious than I was when I was younger.

JP: Okay. You be serious. I’ll be Roebuck. We can be Serious and Roebuck.

JP: That was terrible.

KN: I don’t think our younger listeners are going to get that pun.

KN: I want to thank you for taking the time to talk to us and – about the new book, and if you would like, maybe you could share one more poem we wrap up?

Mr. Snoffle made a waffle

but the waffle turned out awful

it was such an awful waffle.

He refusedrefuse To say no. to eat a bite.

said, “This waffle tastes so awful,”

that he thought to be unlawful.

As he made another waffle

which was not the least bit awful,

for a waffle, it was fine.

in the crafting of this waffle

and he laughed, “I’m feeling gleeful.

My new waffle is divine.”

KN: Very nice.  Very nice.  I’m with you on that one, Jack.  I love tongue twisters myself.  I love writing them.  I love reading them

KN: Ah.  I think, I will.  Well, thank you very much for taking the time to talk to me today and I really appreciate it.  Good luck on the new book and …

KN: Yup.  Everybody in this has been – Kenn Nesbitt with Jack Prelutsky on the Poetry4kids.com podcast.  Take care, Jack.