It is easy to learn to write a haiku, but it can take a lot of practice to learn how to do it well. This lesson will give you the basics for writing your own haiku. It’s up to you to practice by writing a lot of them so you will get very good at it.

What is a Haiku?

A haiku is an unrhymed three-line poem. It is based on a traditional Japanese poetic form. Though there are different ways to write haiku, the traditional pattern in English is to write the first and last lines with five syllables each, and the middle line with seven syllables. In other words, the pattern of syllables looks like this:

Here’s another way to visualize the same thing:

Most often, haiku poems are about seasons or nature, though you can write your own haiku about anything you like. If you don’t want to write about nature, and would prefer to write haiku about candy or sports, that is perfectly okay.

One more thing to keep in mind is that the last line of a haiku usually makes an observation. That is, the third line points out something about the subject you are writing about.

Let’s see how we can put these few rules together get your started writing your own haiku poems.

Let’s say that you decide to write your haiku about a season. First you will want to select a season: spring, summer, fall, or winter. I’ve decided to write a haiku about winter, and I know that in the last line I will want to make an observation. I want to say that winter is almost here, but we aren’t quite ready for the snow. Maybe it’s that we haven’t raked the leaves off the front lawn and we need to do it soon before it snows.

Winter is coming.
Snow will be arriving soon.
We should rake the leaves.

If you decide to write a haiku about nature, you will have many more subjects to choose from. You could write about animals, plants, the sky, the ocean, streams, the wind, and so on. Start by selecting a topic, and then decide what you want to say; what observation you want to make about it.

For example, I have decided to write a haiku about my cat. One thing I notice about my cat is that he sleeps a lot. In fact, I’m pretty sure he sleeps almost all night and all day. I’m not sure how he can be so tired. In any case, here is my haiku:

Tired cat sleeps all night.
He needs lots of rest for a
Long day of napping.

Just because most haiku poems are about seasons or nature doesn’t mean that’s all they can be about. If you want, you can even write funny haiku poems. One way to make a haiku funny is to have an unexpected last line. For example, if the last line says the opposite of what the reader expects, it becomes like the punchline of a joke. It also helps to write about a funny subject.

As an example, I decided it would be funny to write a haiku excuse for why I can’t turn in my homework. Here it is:

My homework is late.
My dog ate it this morning.
I sure like my dog.

Notice that this ending is unexpected. Most readers would expect the poem to end with something like “can I turn it in tomorrow?” or “I’m mad at dog” or something like that. By saying “I sure like my dog,” I am telling the reader something they don’t expect, which will hopefully make them smile.

When you are all done writing your first haiku, see if you can write another one. And, most importantly, have fun! 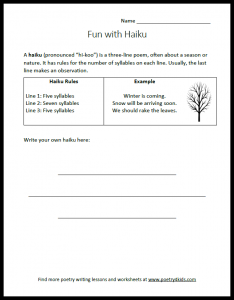