I Went to the Movies 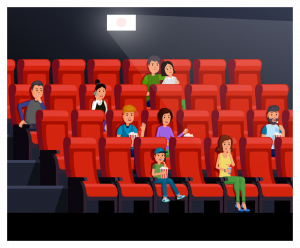 One night I was bored, so, at 7:15,
I went to the movies and climbed in the screen.
I instantly found I was part of a scene
where aliens landed their flying machine.
They caught me and took me to meet with their queen.
Her teeth were enormous. Her face was all green.
Her head was the shape of a garbanzo bean.
She said they were going to cut out my spleen.
I never knew alien queens were so mean!
I let out a yell like a crazed wolverine,
and jumped out the window and got away clean
by taking command of a spy submarine,
and sailing away underwater, unseen.
The audience cheered as I climbed from the screen.
This film was like nothing that they’d ever seen.
I got to ride home in a long limousine.
My picture appeared on a film magazine
that said I was now the world’s most famous teen.
I thought this was awesome, and so I was keen
to do it again. It became my routine.
And now every evening, at 7:15,
I go to the movies and climb in the screen.