From the book The Armpit of Doom

Nathaniel Naste
once ate some paste
he’d taken home from school.
He scooped a bit
and tasted it
and hollered like a fool.
His face got laced
with paste that graced
his forehead and his hair.
Some paste got placed
upon his waist
which glued him to his chair.

Nathaniel cried
and, mortified,
his mother came to see.
She tugged, she tried,
she pulled and pried
but couldn’t get him free.
For she was stuck
in pasty muck
and called Nathaniel’s dad,
who raced in hastehaste moving or acting quickly; speedy; hurried.,
embraced the paste,
and pulled with all he had.

But father too
was stuck like glue
to poor Nathaniel’s mother,
and it ensued
they also glued
his sister and his brother,
his cat, his frog,
his bird, his dog
(a parakeet and spaniel),
till each at last
were fastened fast,
cemented to Nathaniel.

The neighbors came
and soon the same
was happening to all.
They faced the paste
but soon, disgraced,
they placed an urgent call
to nine-one-one
and on the run
came firemen and police,
who tried with ropes
and prayers and hopes
and bucketloads of grease.

But nothing helped
and each one yelped
to be in this position
encased in paste
to find they faced
a sticky proposition.
Across the floor
and out the door
and halfway down the street
with knees on hips,
and hands on lips,
and elbows stuck to feet.

The Army marched
but soon were starched.
The Navy gummed their ships.
The Air Force flew
but stuck like glue
to all those knees and lips.
The President
gave his consent
for every single person
to lend some aid
but this just made
the situation worsen.

And in the end
it’s true, my friend,
no solitary granule
of any worth
was left on Earth
not pasted to Nathaniel.
So don’t you fail
to heed this tale
and never taste your paste,
or you may find
you’re in a bind
Like poor Nathaniel Naste.

I love “narrative” poems, poems that tell a story. I love poems with crazy characters and “tall tales,” poems that are so exaggerated they are completely impossible. And I love “cautionary tales,” funny stories about characters who meet an unpleasant fate because they did something they shouldn’t have.

Nathaniel Naste is the story of a boy who didn’t listen when he was told he shouldn’t eat paste, and about the terrible fate that befell him (and his family, pets, neighbors, and, eventually, everyone else in the world) because he did it anyway.

This poem follows in the tradition of older poems like Shel Silverstein’s “The Extra Sticky Peanut Butter Sandwich” and “Sarah Cynthia Sylvia Stout,” and Hilaire Belloc’s Cautionary Tales for Children.

If you enjoy this poem, you might like to read some of my other cautionary verses, including “Wendy Wise,” “Sam, Who Only Ate Jam,” and “Willie’s Wart.”

From the Book The Armpit of Doom 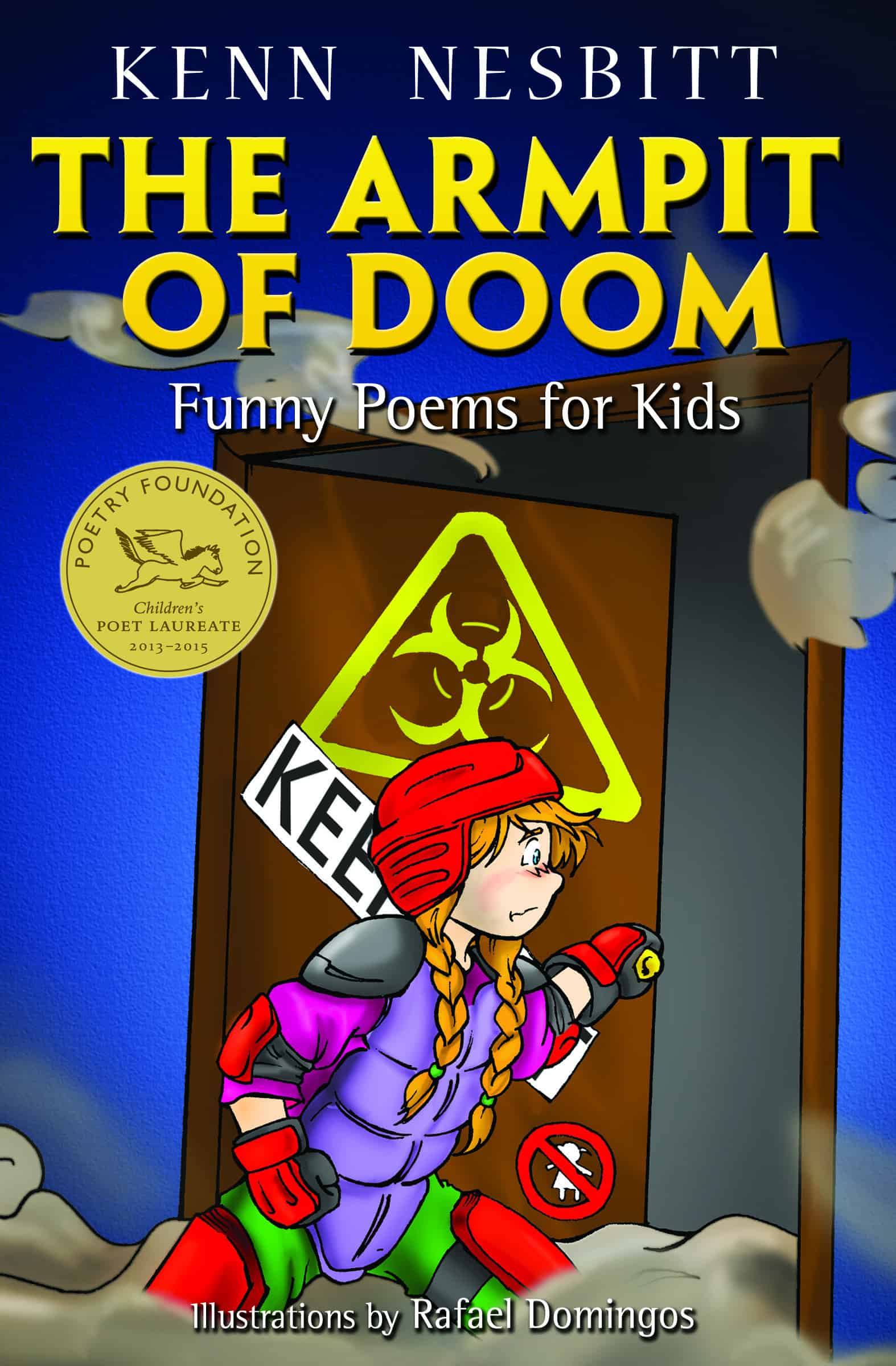