From the book Deep Sea Dance 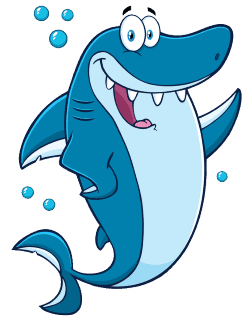 Down on the ocean floor,
Deep in the sea,
Everybody’s dancing.
Ready? ONE, TWO, THREE!

Barracuda boogiesboogie to dance energetically, especially to rock music.
With the octopus and eel.
Sea horse does a square dancesquare dance a dance by a set of four couples arranged in a square or in some set form.
With the salmon and the seal.

Jigglejiggle to move up and down or to and fro with short, quick jerks. goes the jellyfish.
Shimmyshimmy to shake, wobble, or vibrate. goes the snake.
Lobster leans and limboeslimbo a dance from the West Indies, originally for men only, in which the dancer bends backward from the knees and moves with a shuffling step under a horizontal bar that is lowered after each successive pass.
while the sea snail shakes.

Everybody’s dancing in the
deep, deep dark.
But run away! Run away!
Here comes the shark!

Where did everybody go?
He heard the music play.
He must have missed the party.
They must have gone away.

Shark is all alone upon
This underwater shelf.
That’s alright! Shark is happy
Dancing by himself.

Shark begins to shuffleshuffle to move (one's feet) along the ground or floor without lifting them. to perform (a dance) with such movements..
Shark begins to spin.
He fluttersflutter to wave, flap, or toss about. with his flipper
And he wiggles with his fin.

He doesn’t look so scary.
He wants to party too!
So barracuda joins him
for a bouncy bugaloobugaloo a fast dance of Afro-American origin, performed by couples and characterized by dancing apart and moving the body in short, quick movements to the beat of the music..

Jellyfish then joins in.
So do octopus and eel.
Snake returns to shimmy
With the sea horse and the seal.

Everybody’s dancing
From the salmon to the snail.
But run away! Run away!
Here comes killer whale!

From the Book Deep Sea Dance 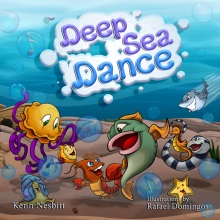